(*note this is a catch-up posting. We're in Wyoming right now. We passed through the Maritimes from June 29-July 6)

For the non-Canadians reading this, the Atlantic Coast provinces New Brunswick, Nova Scotia and Prince Edward Island (PEI) are collectively referred to as the Maritimes. They get referred to as a group because there are a lot of cultural similarities between the three of them: a lot of fishing/seafaring culture, traditional folk music, and a general reputation throughout Canada for being a chatty, friendly bunch of people.

Case in point for the reputation: If you recall our Tail of the Dragon adventure, in the morning we woke up to rain so went for breakfast to wait for drier weather. The guy in front of me in line had a shirt from near Toronto, so I asked him about it and started chatting and ultimately we ended up having breakfast with him and his 6 other Canadian friends. At some point I mentioned growing up in Nova Scotia to which he responded: "Oh, you're from the east coast... no wonder you're having such a hard time meeting people... you Maritimers would talk to a fence post if you thought it would talk back!"

So, Jon was primed for Maritime culture but hadn't seen it in full effect. Fortunately, we had a 1300mile / 2100km route through the three provinces planned!

It's worth noting that crossing from Maine into New Brunswick marks the third corner of our "4-corners" trip around the US. It was already close to sunset when we crossed the border and we were heading toward St John to camp for the night. We knew we were going to be a bit late, so we called ahead and of course the woman working at the campground offered to just stay an extra 15 minutes to wait for us so we could check in (because Canada... -jf). Once we were checked in and had our site, we headed into town to see if we could find some dinner. At this point it was about 10:30 at night, we parked our bikes, had just gotten our helmets off and barely crossed the street when a guy stopped us on the sidewalk to talk to us about our bikes (I would characterize him as 'aggressively friendly' -jf). It turned out he was a chef at a restaurant nearby and he started recommending the various different places we could go to eat. We opted for a Thai place with a patio that opened onto a street with a stage set up and a band playing. The band was a young east coast group complete with kilts, fiddle, bagpipes and Scottish dancing - if you haven't heard east coast music, you're seriously missing out. All in all, I thought it was a good into to Maritime culture all crammed into a single evening, but the icing on the cake came at the very end when Jon went to the bathroom before we left. He came out with an odd expression on his face, and as he describes it, he was standing at the urinal in the admittedly small room when the guy next to him looks over and says "Smallest bathroom you've ever seen, eh?" which is apparently six more words of conversation that Jon has ever had at a urinal in his entire life. Yup, Maritimers - we're a chatty bunch.

We specifically camped in Saint John because there is a ferry there that goes to Nova Scotia. I grew up taking the ferry back and forth from Nova Scotia to PEI so ferries have a nostalgic place in my heart. Although admittedly, most of the ferry rides I took as a kid were rushed and hectic as we raced to get to the ferry before we missed the boat. This time, we picked a campsite 10 minutes from the ferry terminal and set an early alarm so we could get to the boat early and have a relaxed morning. We got up at 7am, packed up our tent, contemplated getting breakfast or gas on the way but decided to just eat on the boat and get gas on the other side. When we arrived at the terminal, the waved us down to the terminal building near the boat, when we pulled up a woman came running out of the building asking if we were taking the ferry. A bit taken a back, I let her know that yes, we were planning to take the 9:00 boat, to which she informed me that it wasn't a 9:00 boat, it was an 8:00 boat and would be leaving in 10 minutes! So here I was, once again rushing to get on a ferry just like every other time in my entire life! We ran into the building, to get our tickets, the lady asked about our vehicles ("two motorcycles"), where are they registered ("California"... pause... looks at us... "Cooooooool"... goes back to feverishly typing). Tickets in hand, we were the last two vehicles on the boat and still strapping our bikes down as the ferry pulled out of the dock.

Once we arrived in Nova Scotia, we drove up through the Annapolis Valley, which is the area I grew up in. We stopped at historic Fort Anne - one of the first European settlements on the east coast, it's built into a number of hills that I remember rolling down as a kid and also has cannons.

We drove right through the town I lived in (that I haven't been back to since high school!) and even up to the house that I was born and lived in when I was a kid. Fortunately, my mom still had contact info for the couple that bought the property, so we were able to stop in and walk around to see the place - including the chestnut tree that my parent planted when I was born. We also drove down to the wharf that I used to go to as a kid. It was low tide when we were there. See those fishing boats? At high tide they'll be floating up next to the wharf. Bay of Fundy: highest tides in the world.

We also dropped in on a few people to visit as we passed through. It was awesome seeing Roger & Andrea and Lisa & Hugh. As the parents of my best friends, I grew up a their houses as a kid as much as at my own, so much so that childhood-Calina made a number of cameo appearances in the photos around their houses!

On our way to PEI the next day, we stopped and had lunch one of those friends, Myah, and her two girls - who are about the age we were when we were getting up to our photo-worthy antics.

After breakfast, we were on to PEI. You'll recall that in Maine, I was of the opinion that for a proper lobster experience, you need to go to the Maritimes. Well, to make sure that we did it properly, we got tickets for my whole family to go to the PEI Lobster Festival on the night we arrived. Hosted by Chef Michael Smith (a local Island celebrity chef) in a hockey arena in eastern PEI, it was complete with freshly shucked oysters, lobster bibs, and a lobster mascot leading the parade of lobster dinner.

While eating a lobster dinner is a pretty high-level Maritime activity, becoming an Honorary Lobster Fisher is way better. So when Chef Michael Smith called for volunteers from the audience to come to the stage at the end of the meal, Jon saw an opportunity not to be missed. You'll be pleased to know that after a rigorous initiation process - including a shot of seawater, moonshine and raspberry cordial, peeling a potato, finding a PEI town on a map (I had NO idea where I was.... You can see me ask my neighbor in the vides. -jf), re-tying a fishing buoy and taking the rubber bands off the claws of a live lobster - our very own Jonathan Farro is a certified Honorary Lobster Fisher.

We also had the fortunate timing of being in PEI - the birthplace of Confederation - on Canada Day! Unfortunately, the weather wasn't great, so most of the parades and events were either canceled or moved indoors, but we were not swayed. We headed to the town of Stratford where my brother was volunteering at their Canada Day strawberry social and celebrated in style (my dad and me being particularly stylish with our Canada Day headwear) - Happy Birthday, Canada!

We managed to squeeze in a quick visit with my friend's Jenn & Dean while we were on the Island (but of course forgot to take a photo), then headed off to catch another Ferry back to Nova Scotia. This time we did arrive early enough to have a relaxed boarding for once!

Our second tour through Nova Scotia was through Cape Breton - which is an island connected by a causeway at the northern part of the province. Specifically, there is a loop in Cape Breton called the Cabot Trail - a scenic trail along the coast that goes through the Cape Breton Highlands National Park. A cloud bank rolled in as we came down the west coast of Cape Breton, so we missed some of the sights along that portion, but all in all it was a beautiful ride! 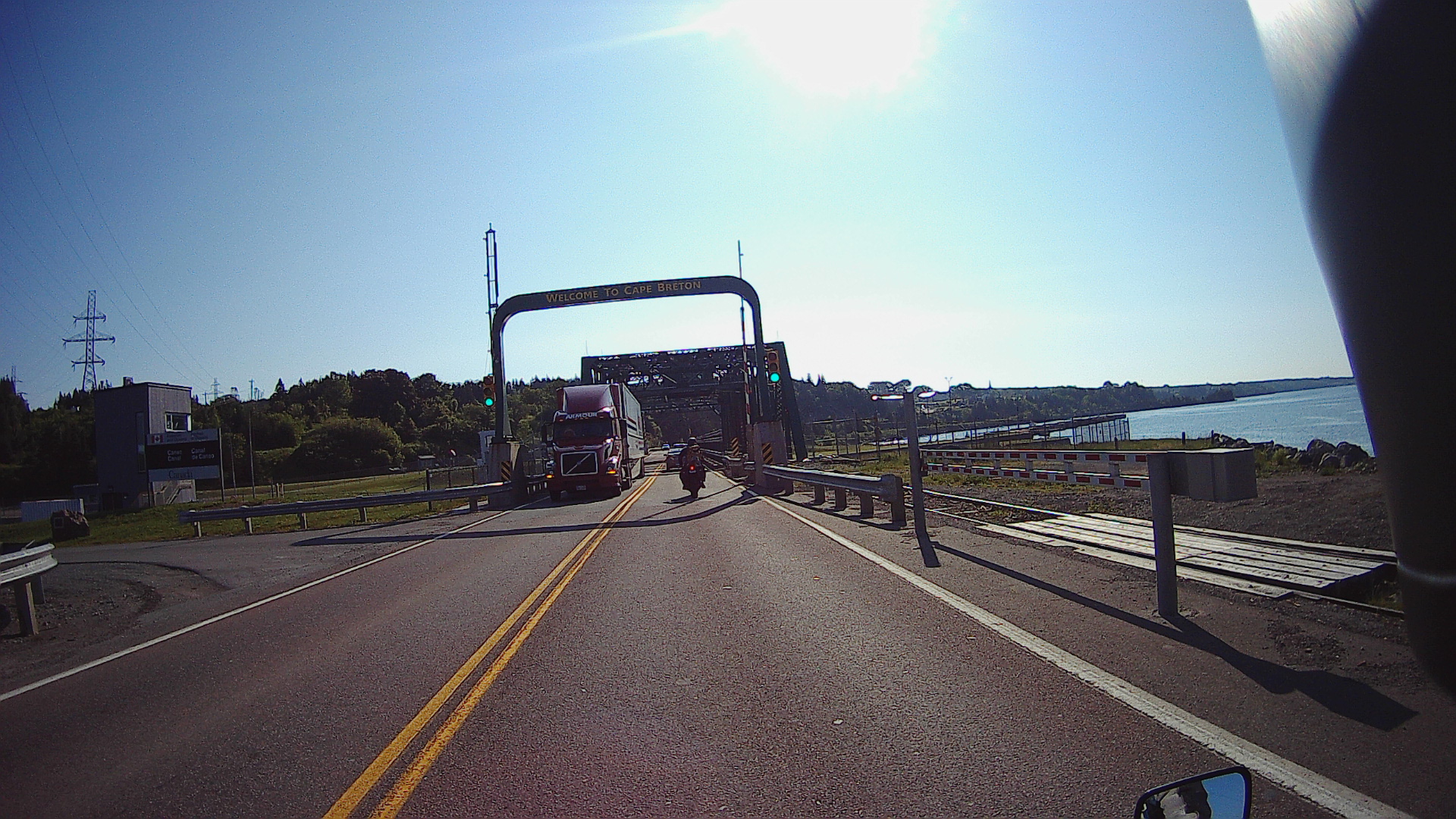 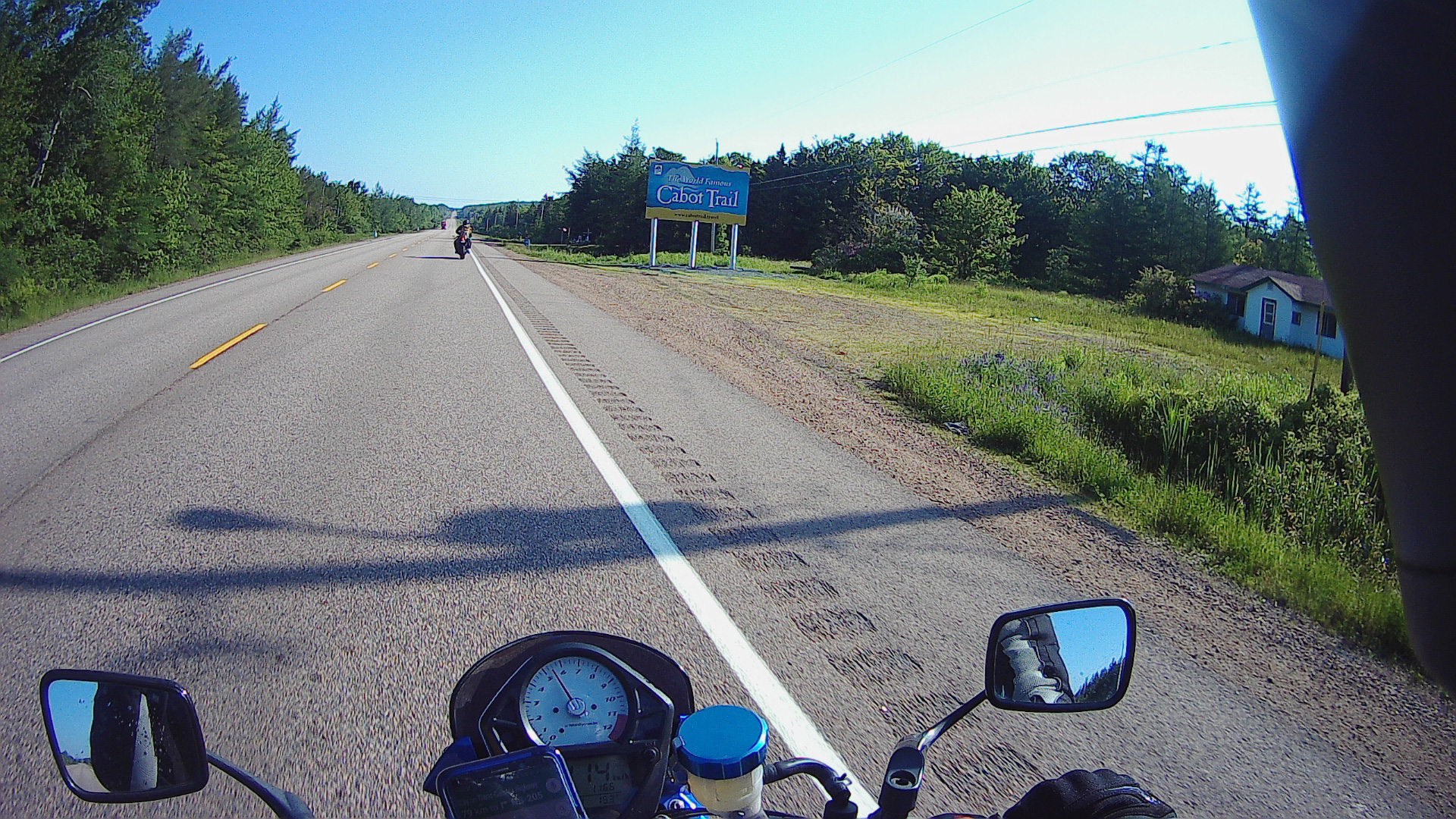 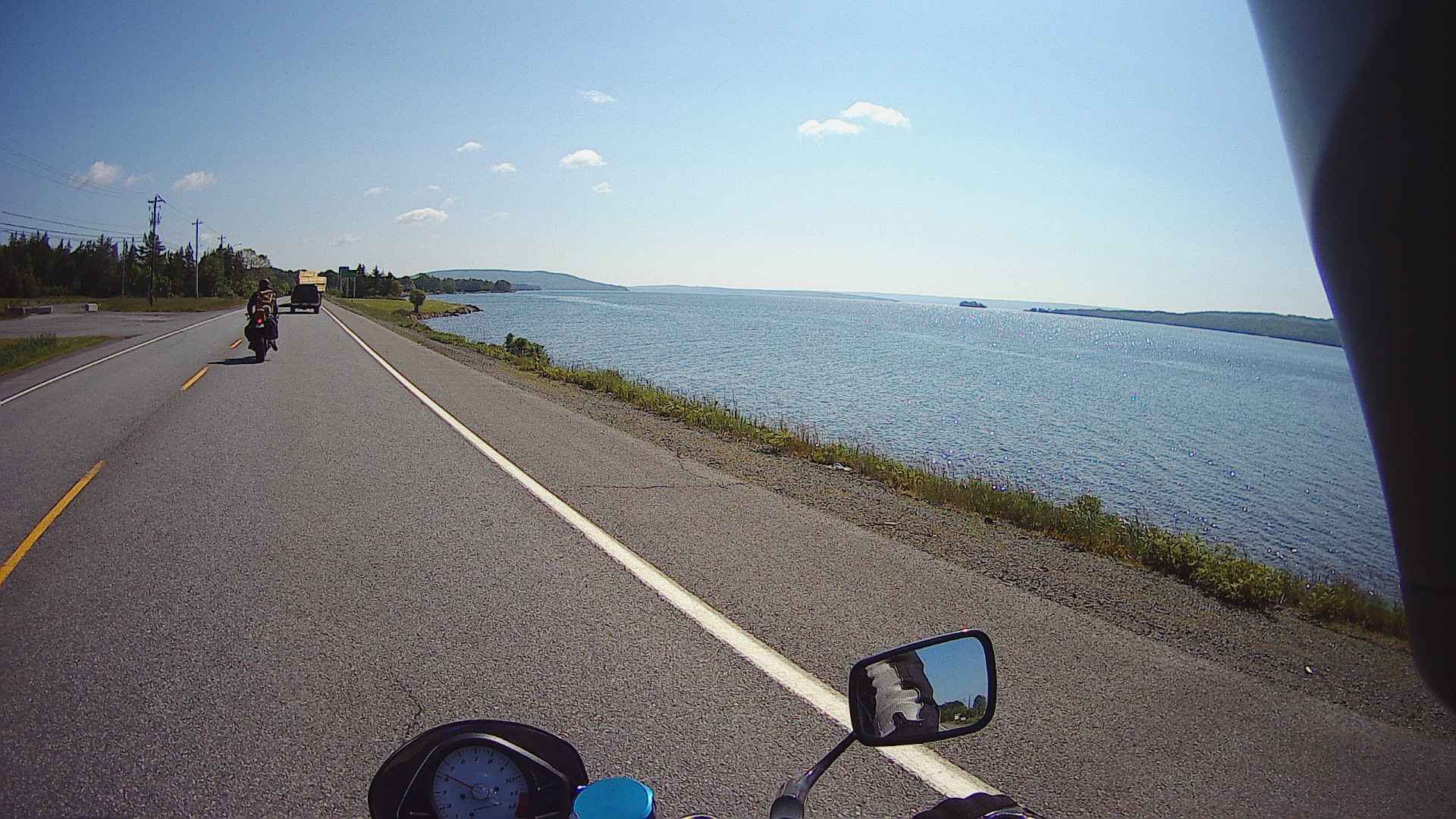 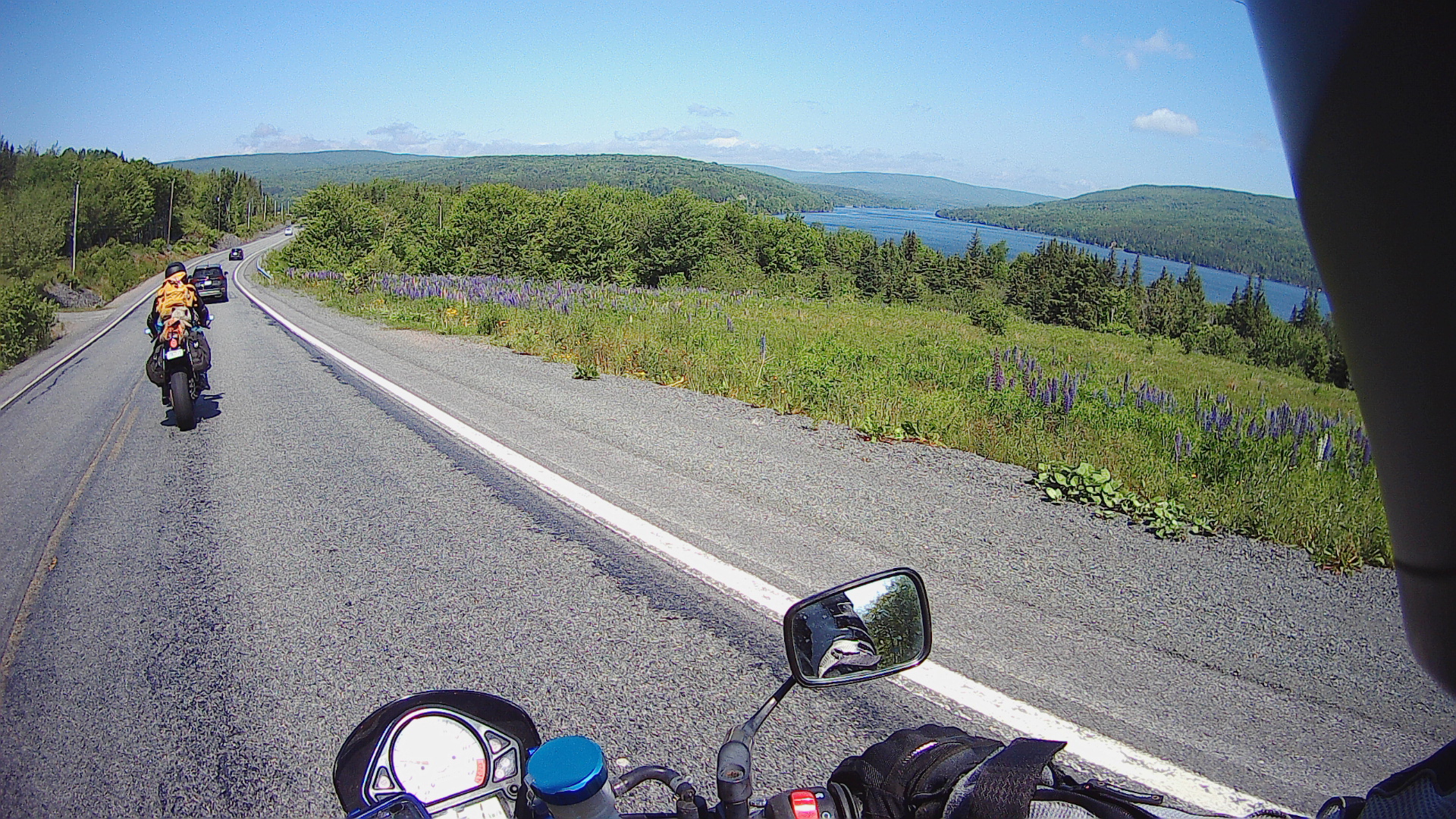 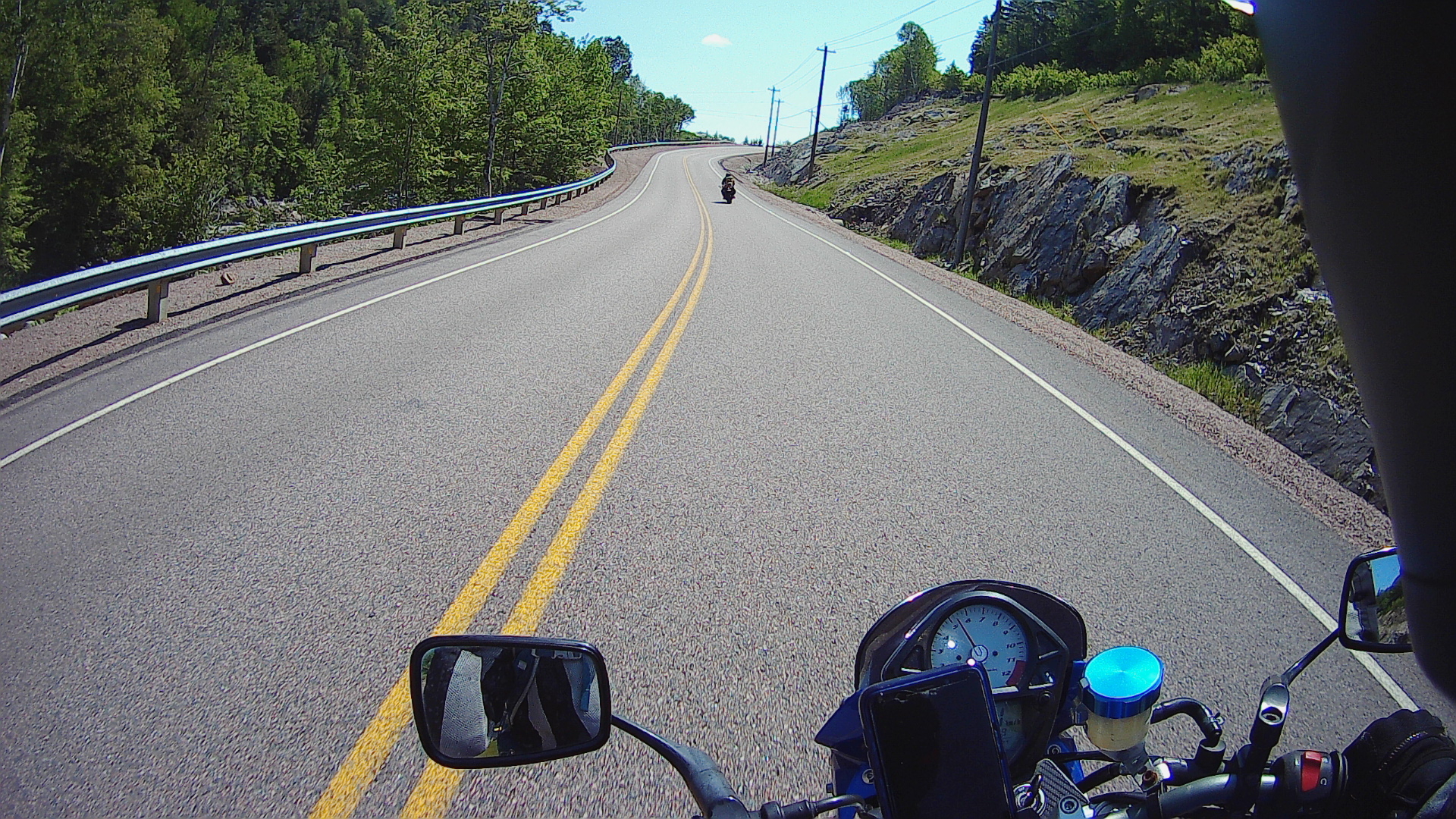 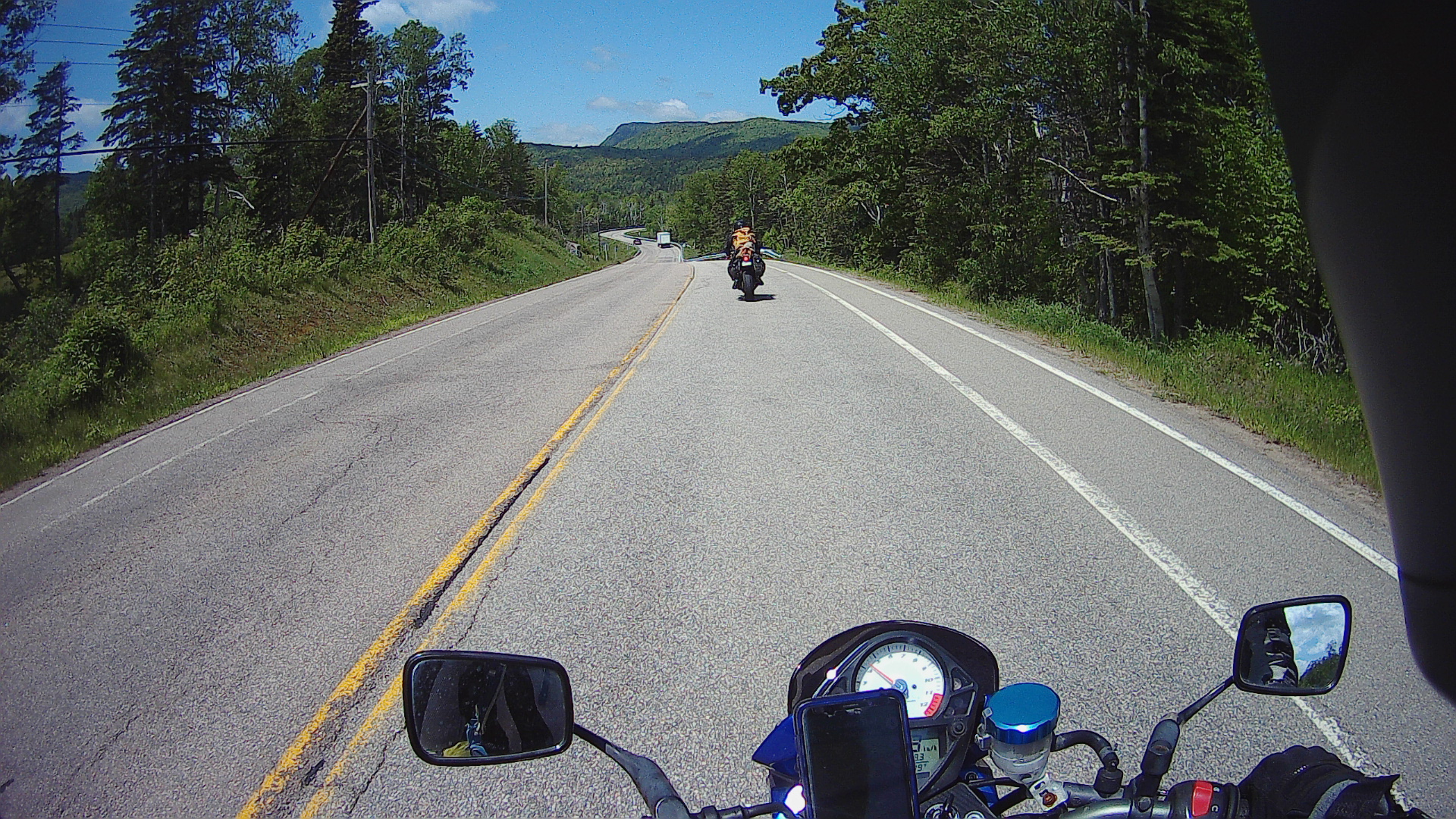 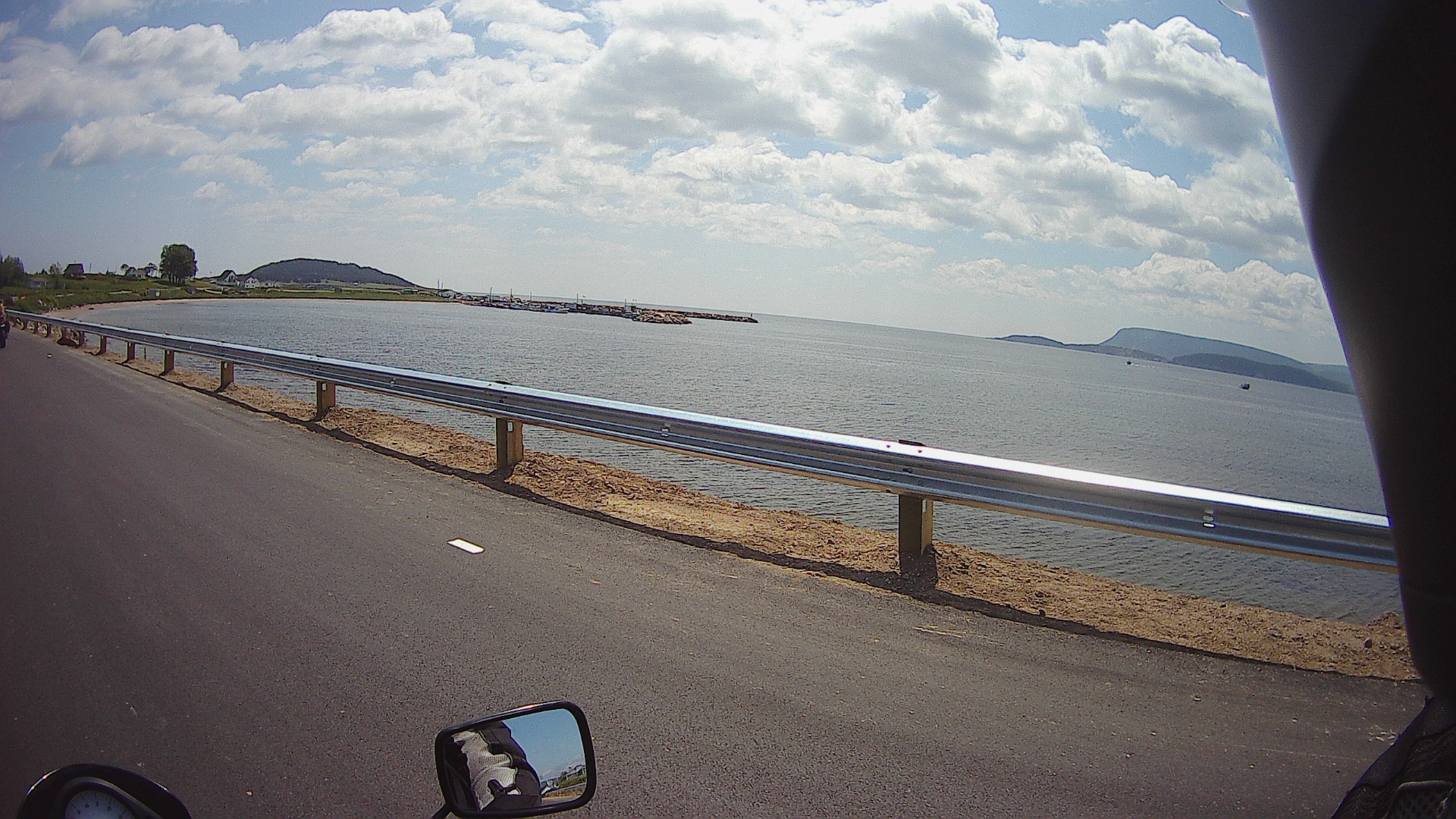 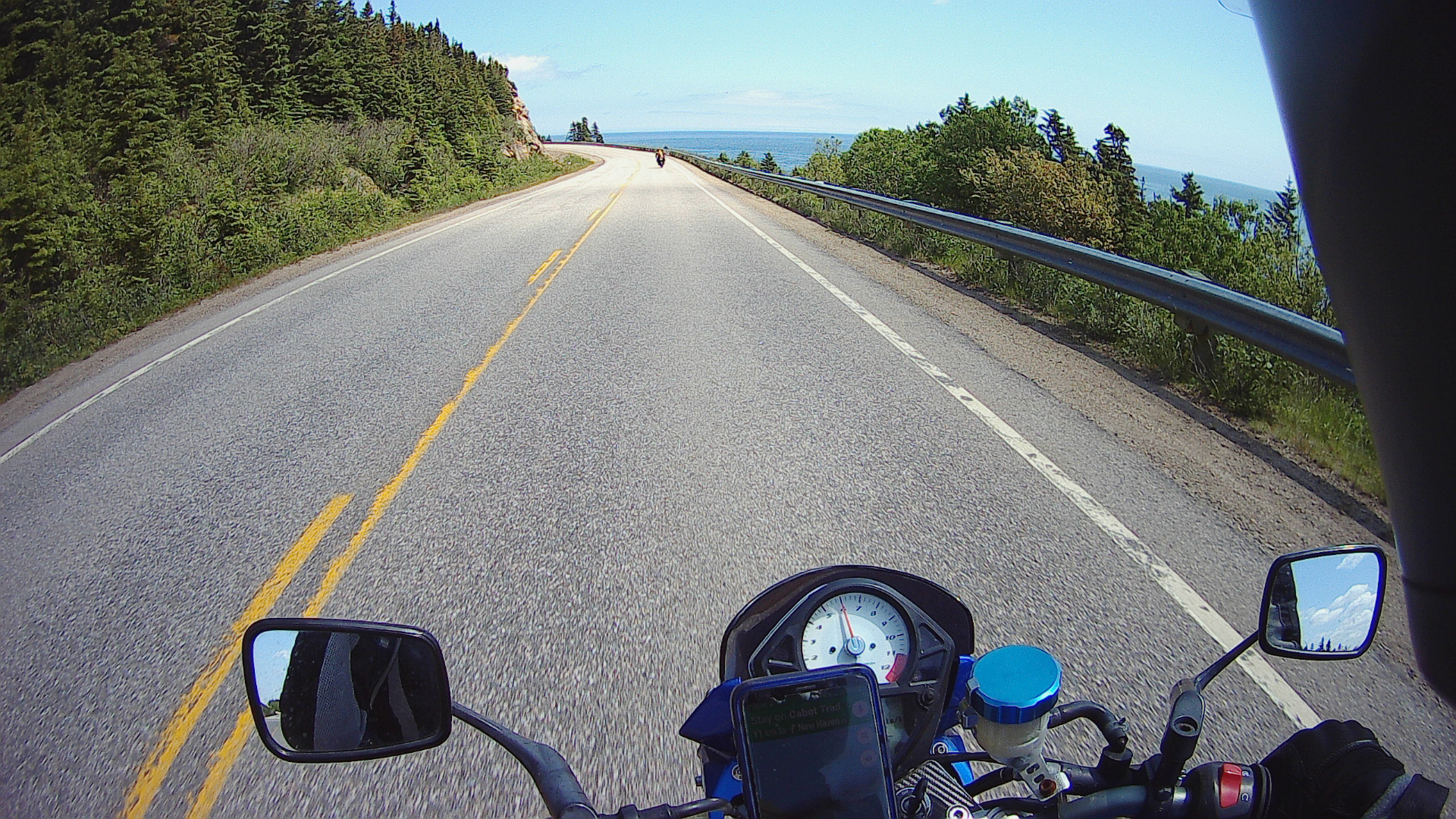 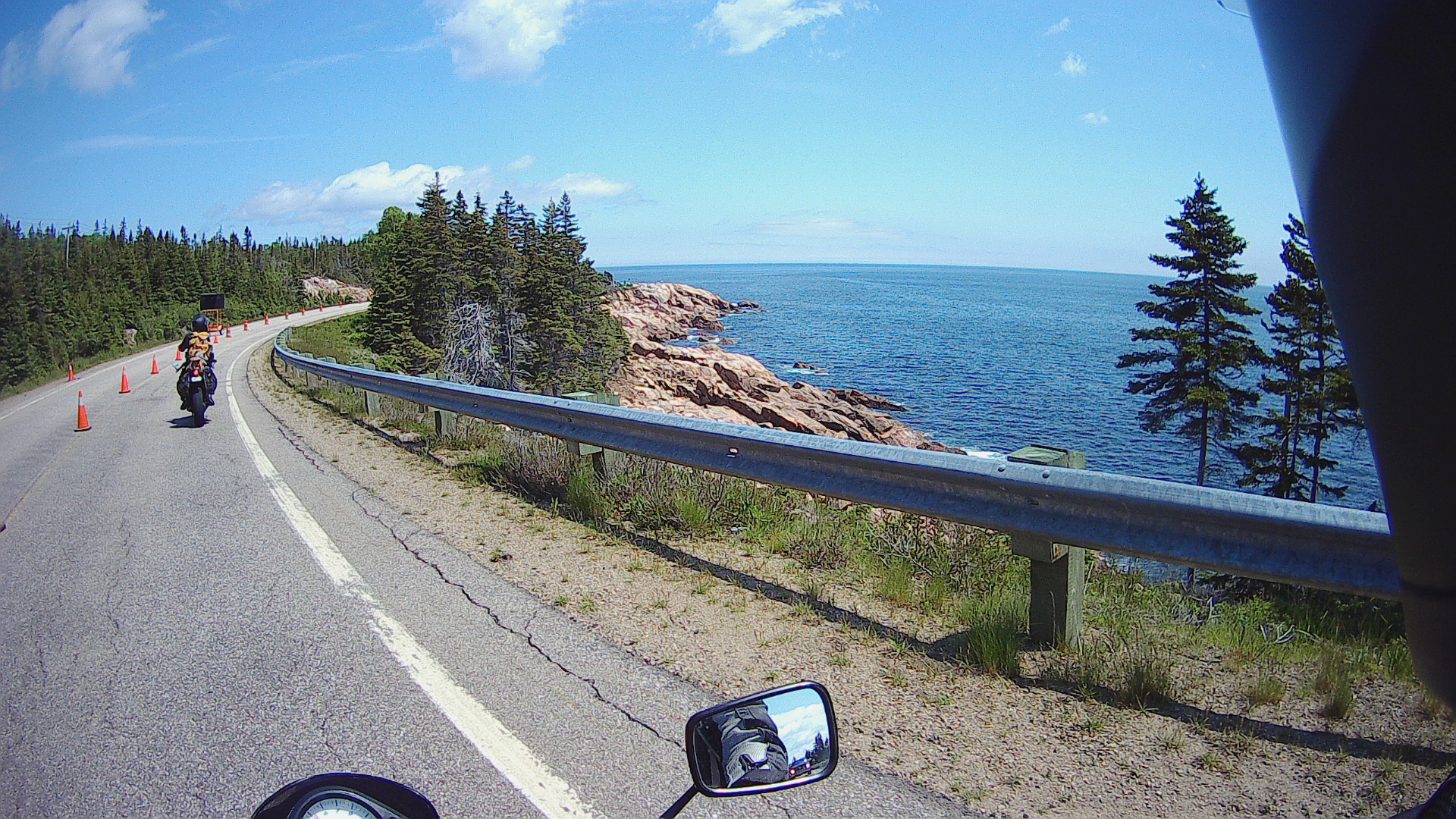 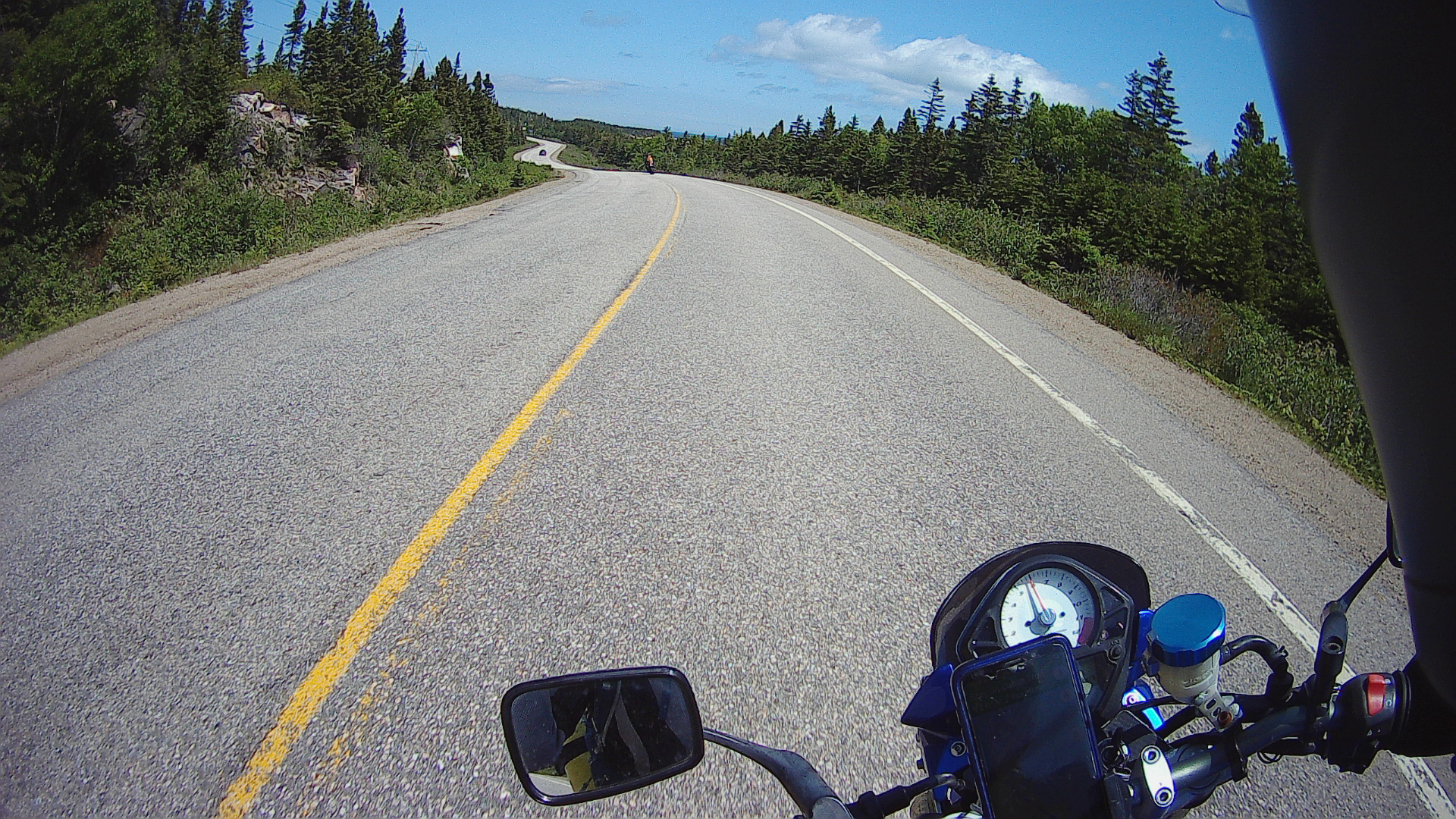 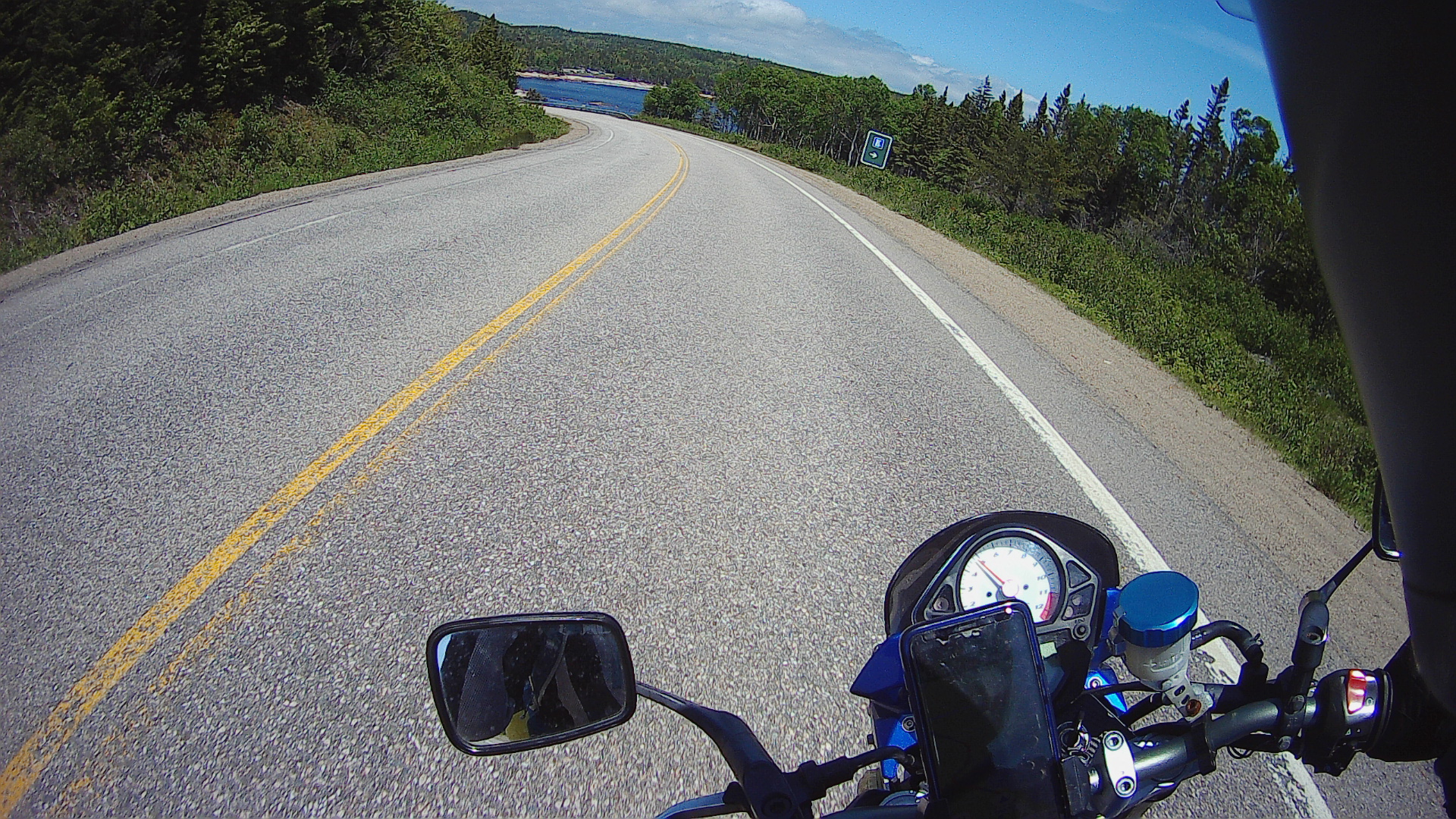 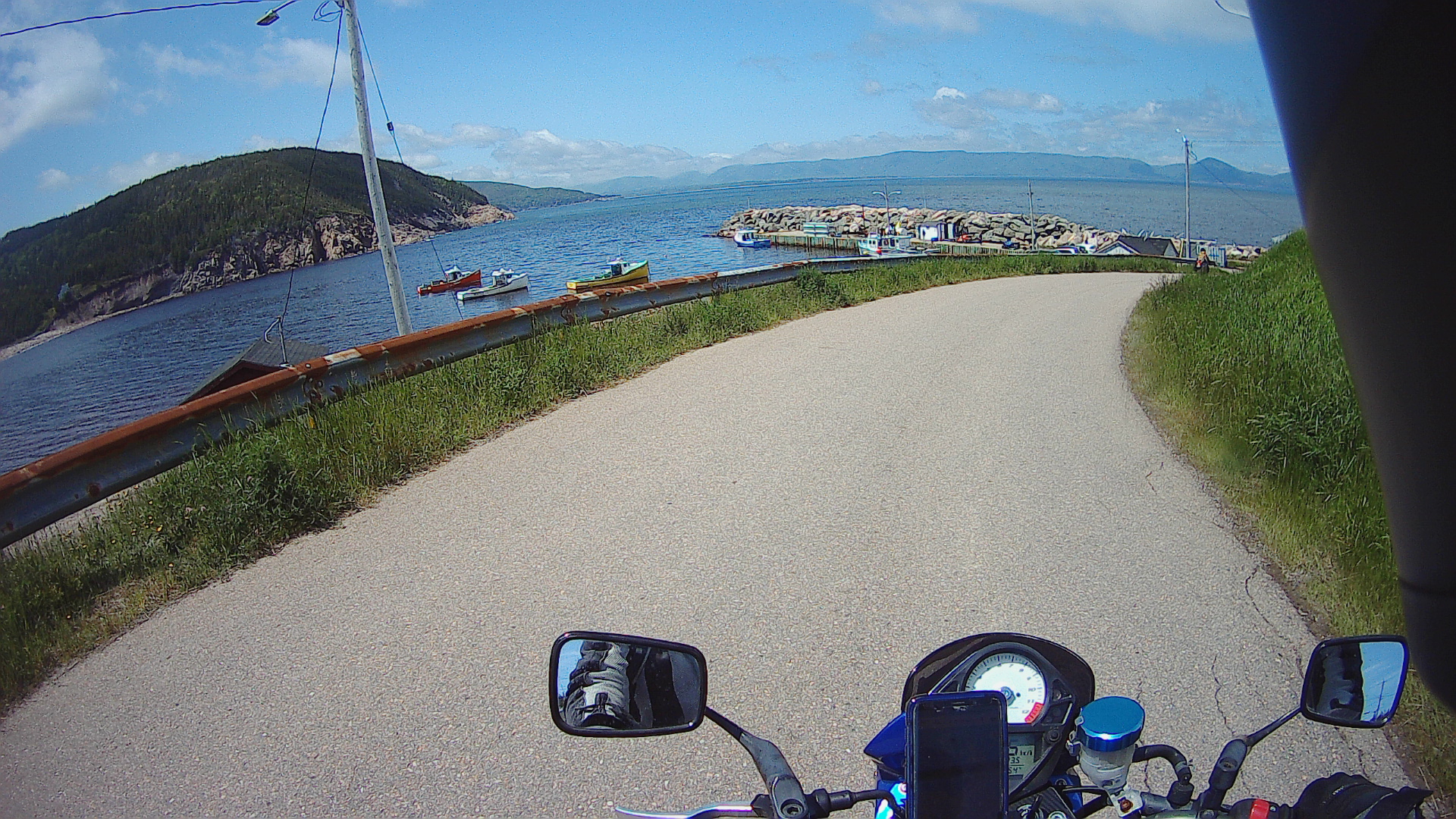 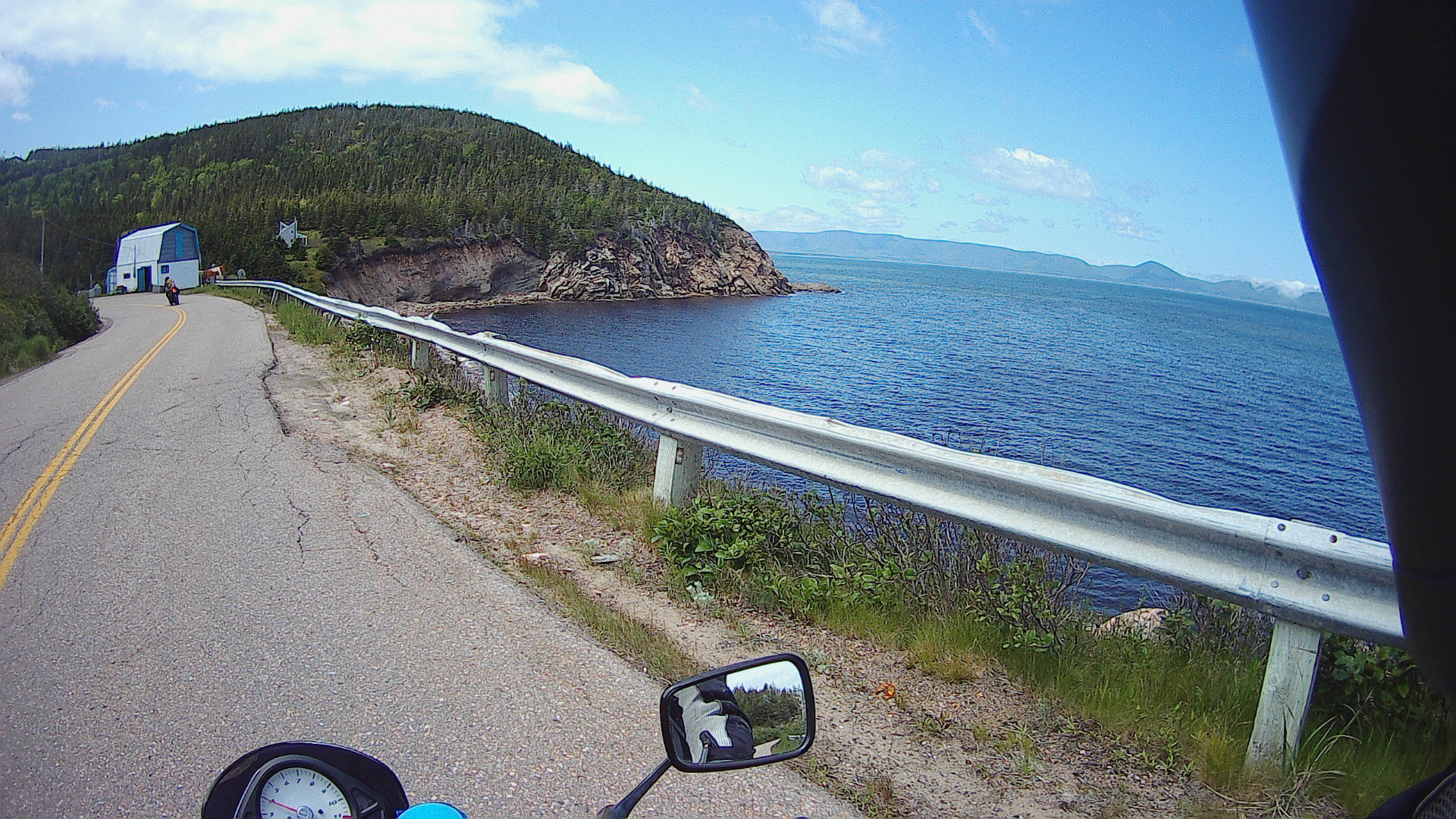 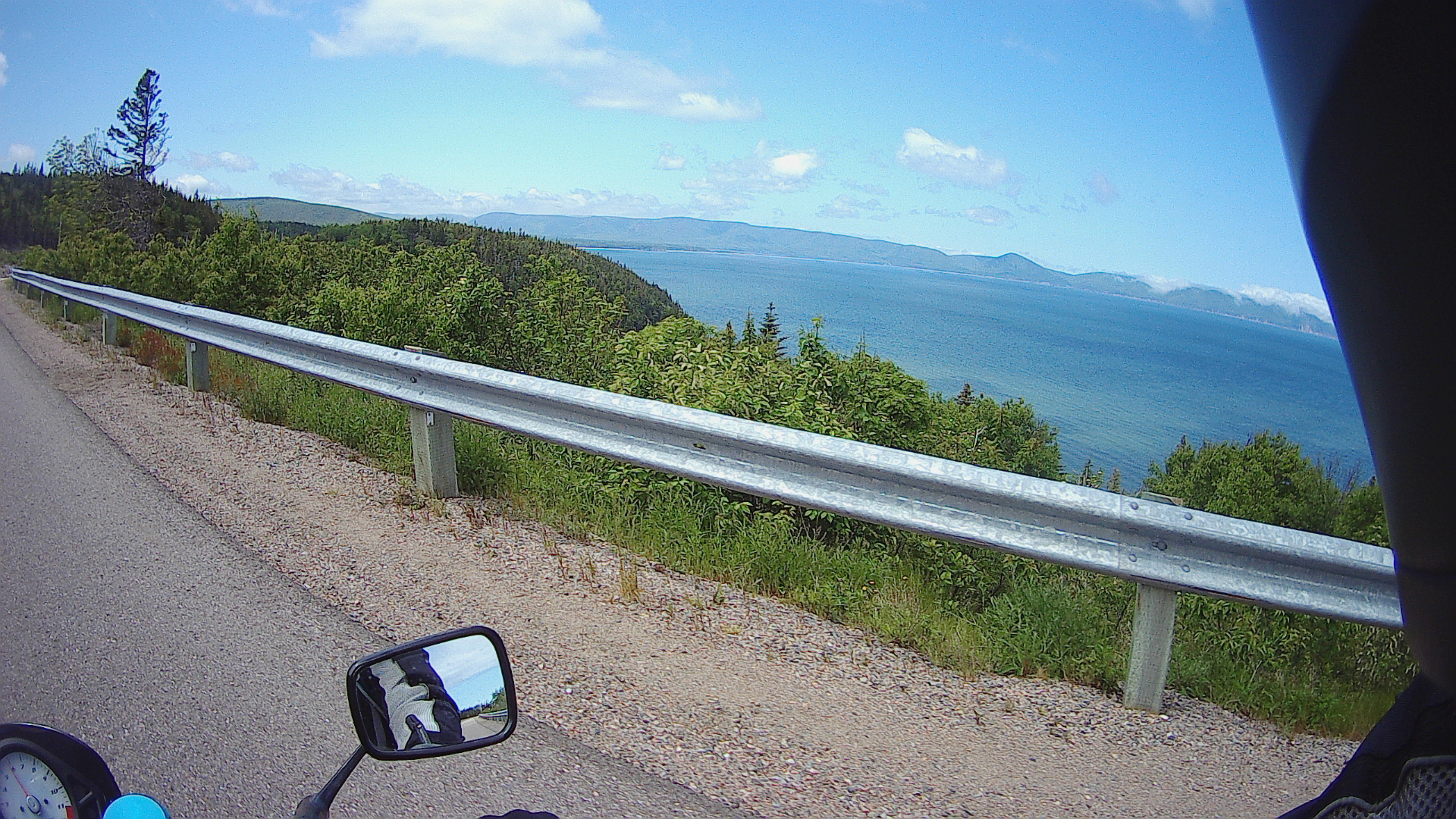 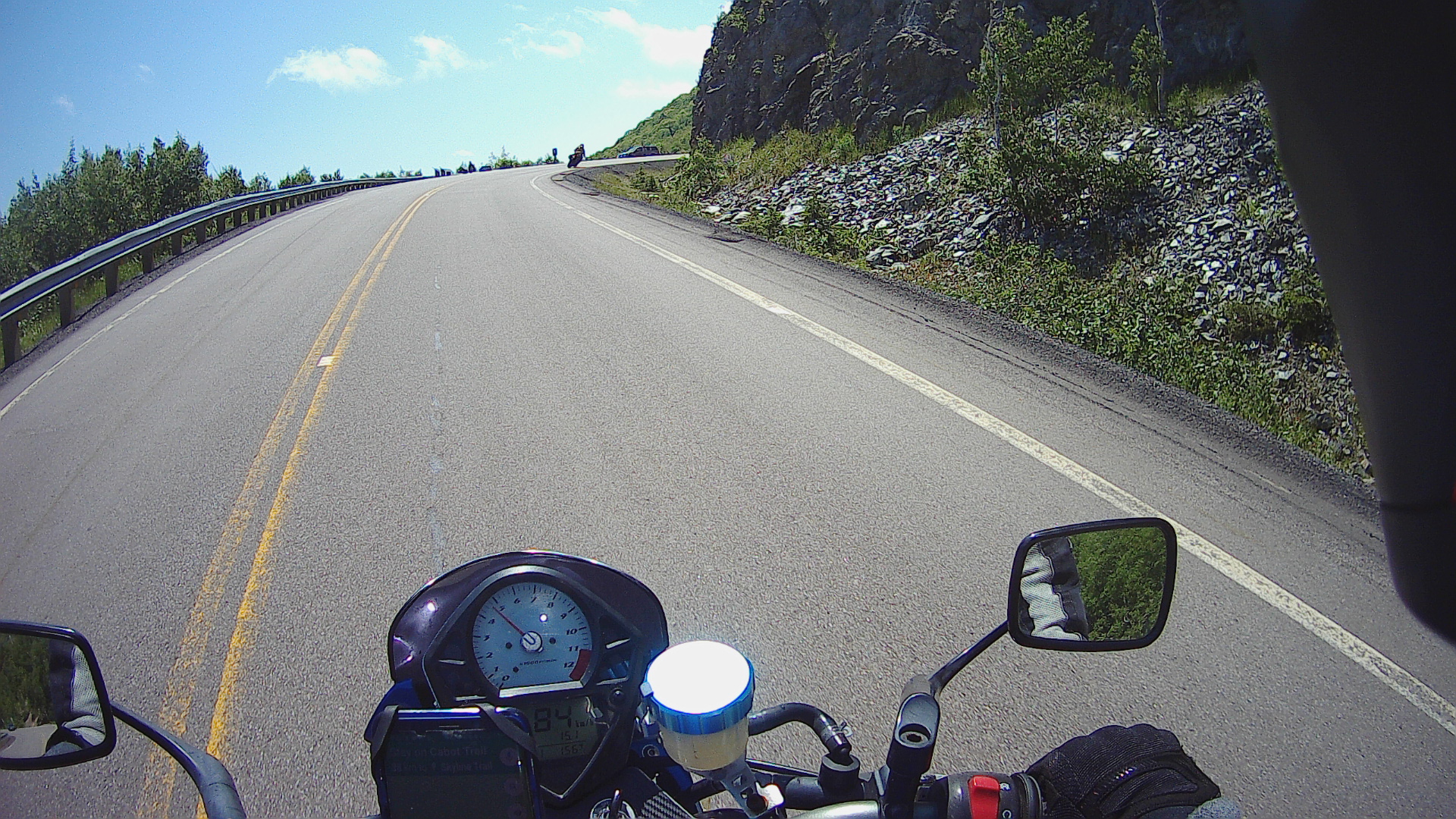 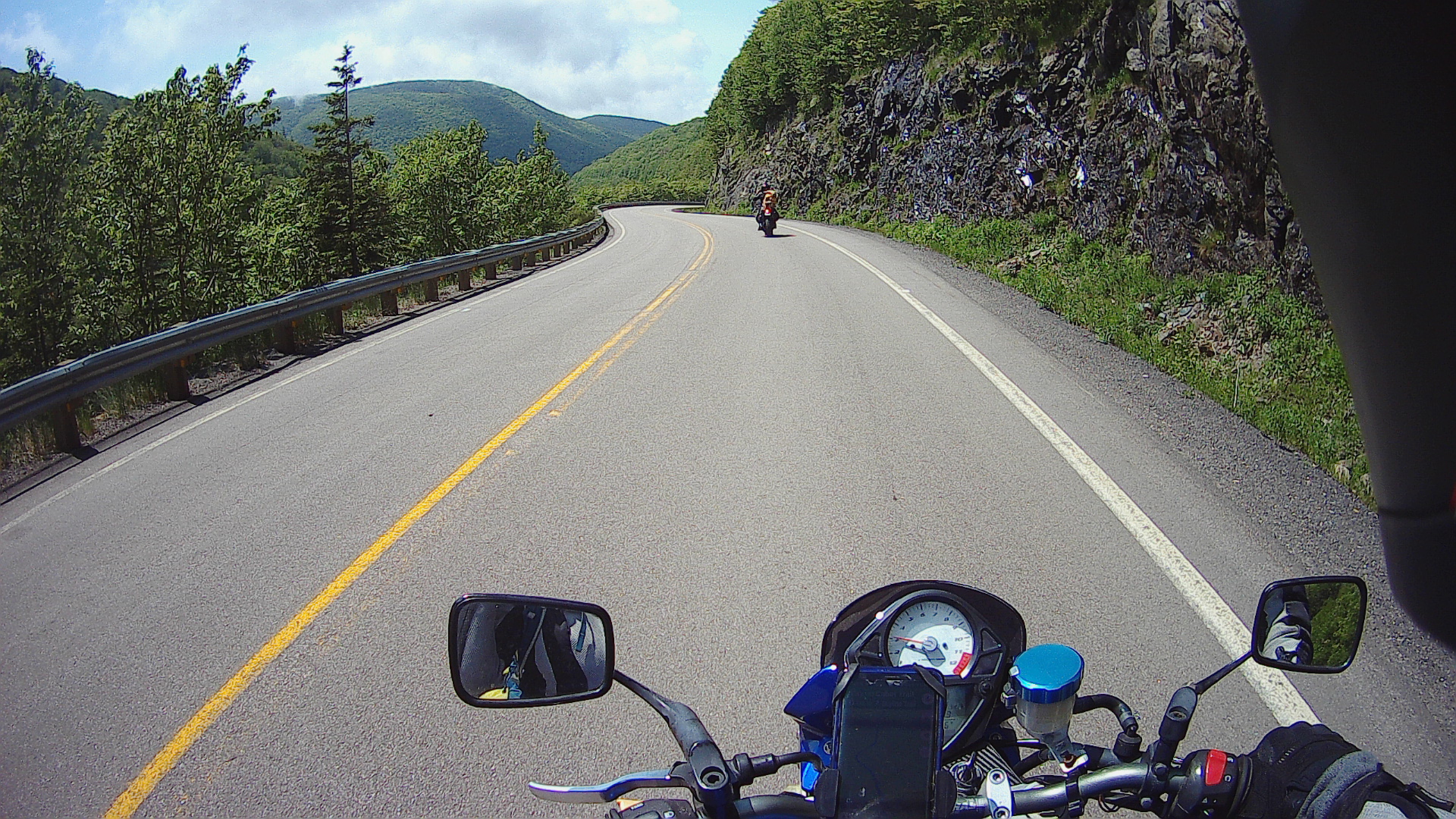 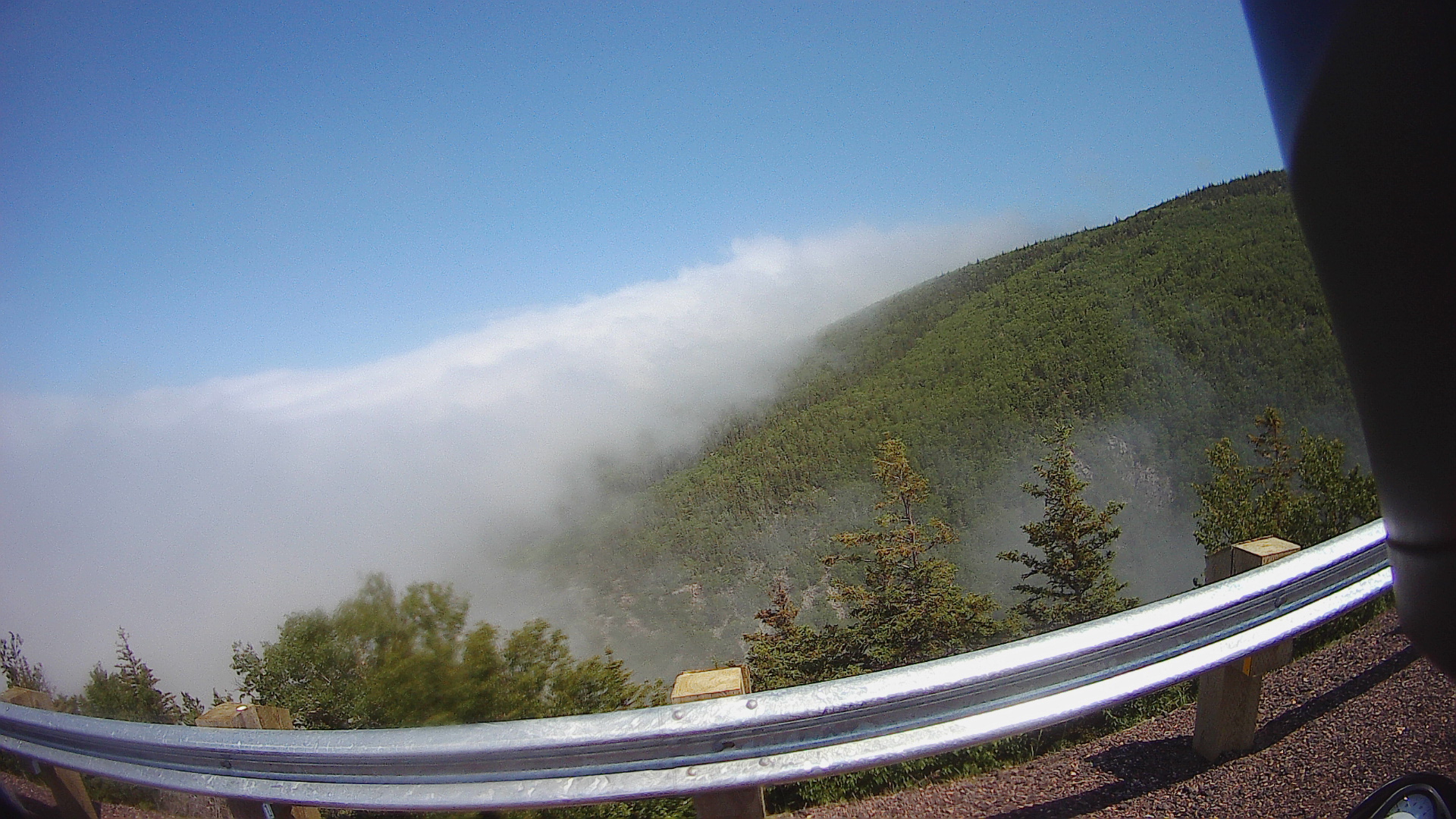 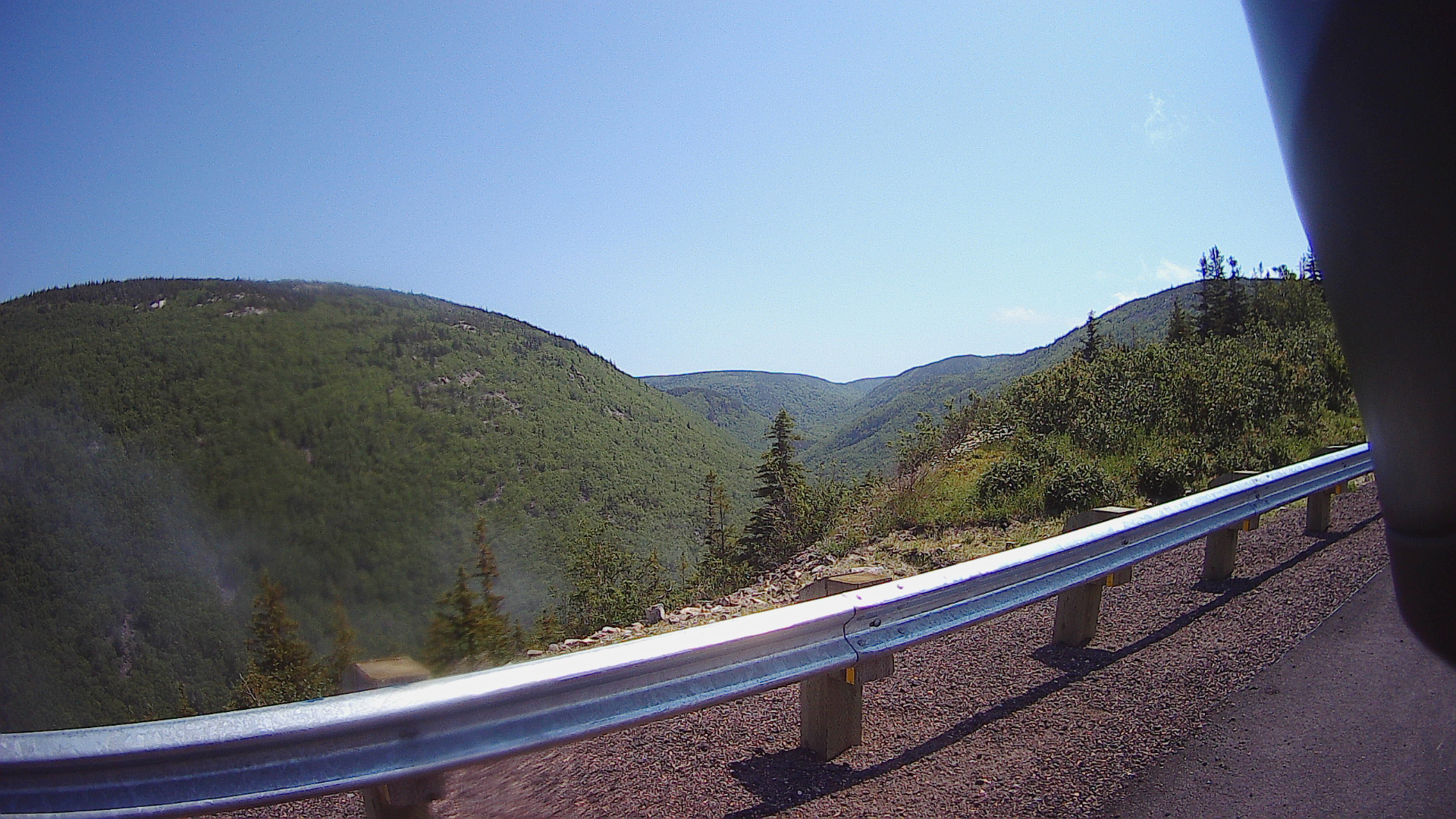 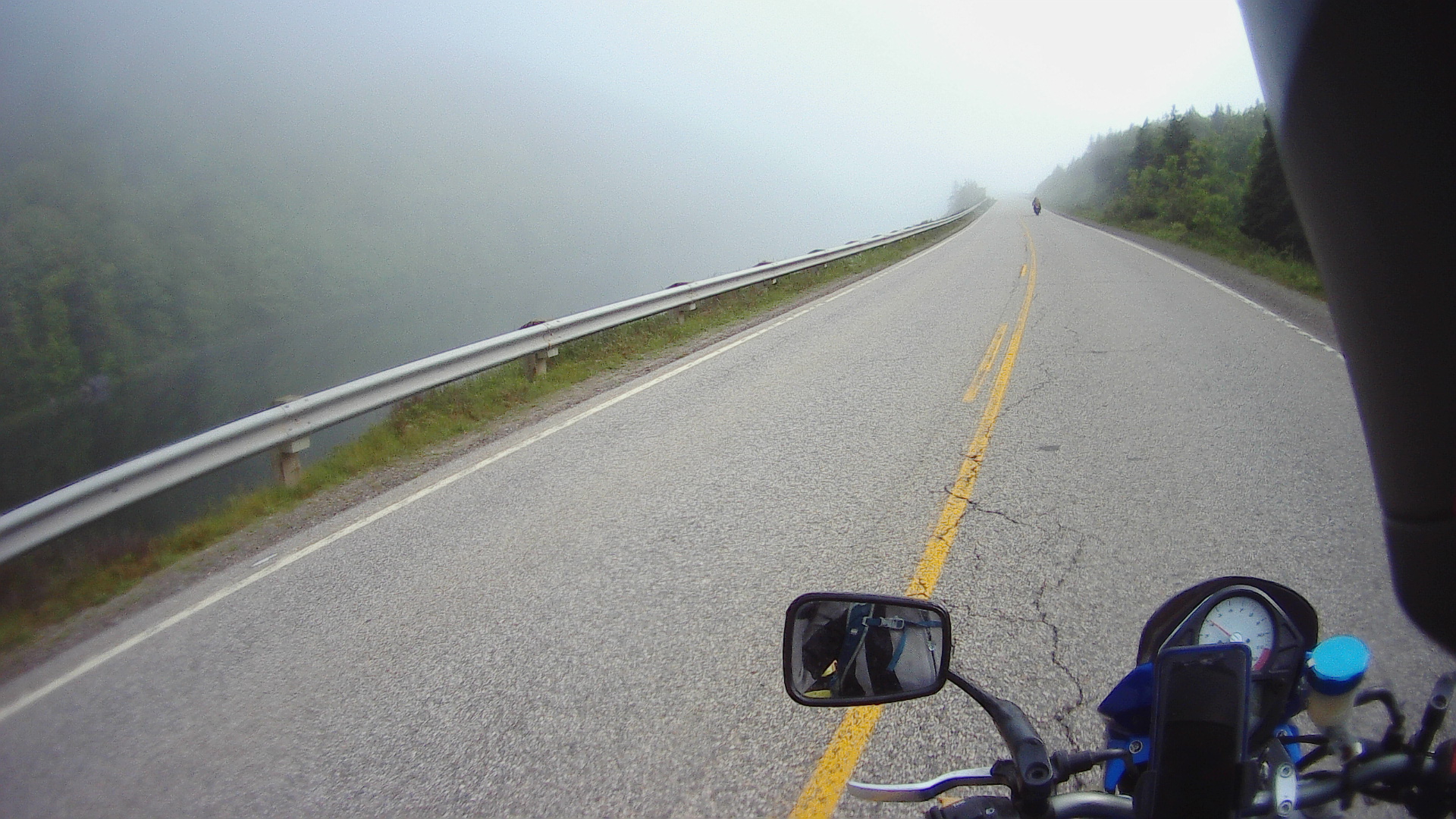 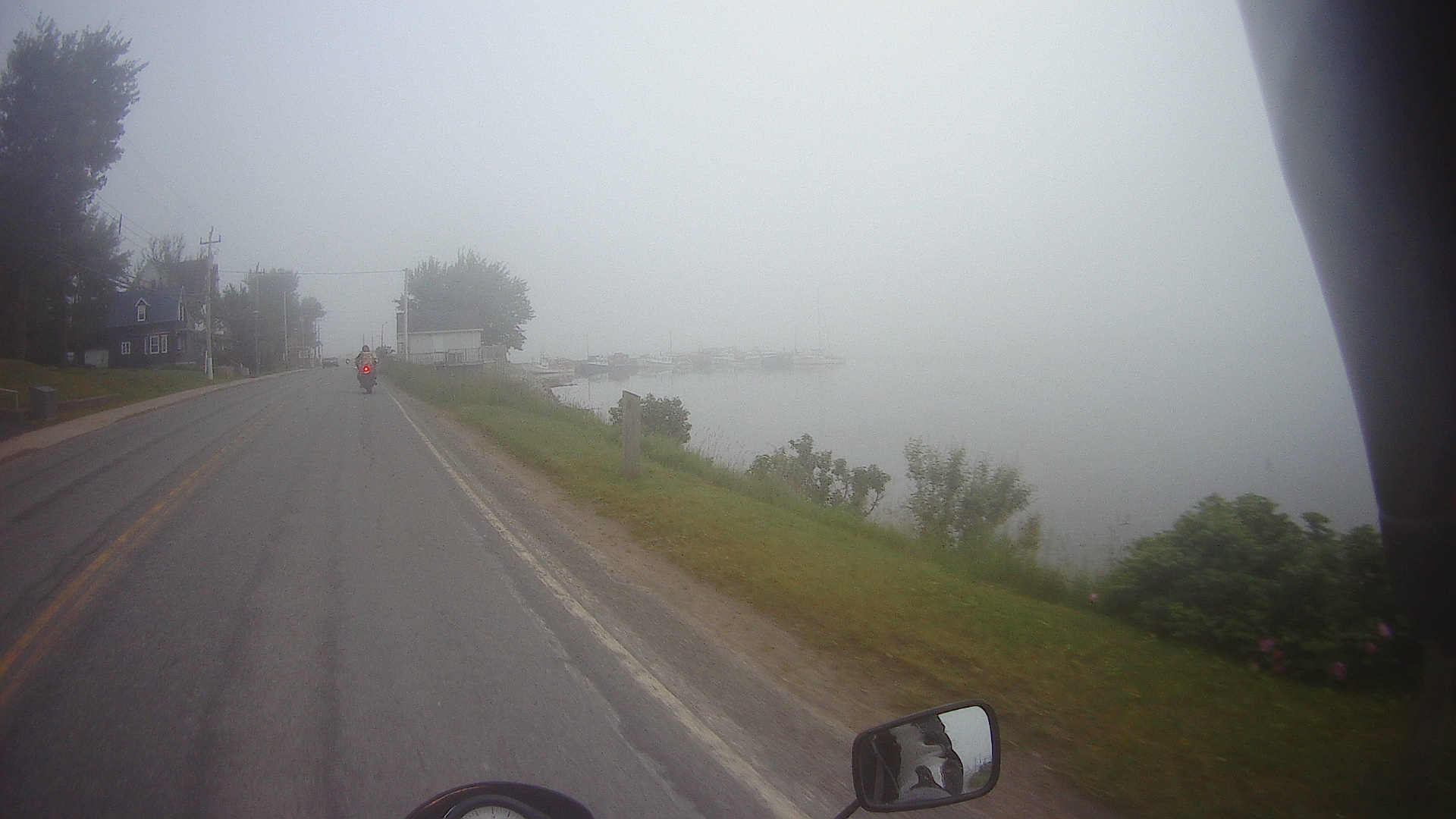 While we were on the Cabot Trail, we did a hike out to White Point - our furthest point on the trip: 3075 miles/ 4920 km as the crow flies. Homeward bound from this point onward!

Once we had finished our Cabot Trail loop, we headed back through Nova Scotia and up into New Brunswick toward our next stop: Ottawa. Looking at a map, this would appear to be almost a straight line, however, since there are no roads cutting through Maine, we needed to ride up through New Brunswick and down through Quebec to get around it.

About two thirds up through New Brunswick, near Bathurst, we saw the clouds go dark and figured there was a storm coming. We pulled off of the highway to find a spot for dinner and to wait out the storm and were just about to get going again when my bike wouldn't start! And so we found ourselves confronted with our second bout of mechanical difficulty. Again, a dead battery, but this time, instead of the relative comfort of being just outside of Jon's brother's apartment, we found ourselves on the side of the road, soaking wet as the storm we were trying to avoid rolled through. It was a relatively simple fix for Jon to ride to a Canadian Tire and pick up a new battery for me, however, given our sodden state, we decided to call it a day and stay in Bathurst for the night.

The day after Bathurst, riding from there to just outside of Montreal, has been our longest riding day of the trip so far (about 550 miles/880 km), but it included on of the prettiest stretches we've ridden through along a river valley in Quebec between Campbellton and Rimouski. Not only was it a beautiful curvy road through the valley, it also included a historic covered wood bridge that we got to ride our bikes across!

Boston ... and Kansas City and "Freedom!"